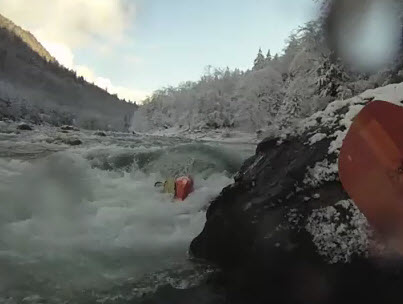 Dave Moroles testing out Lunch Hole on the Skykomish

Scott Henderson posted a really poignant account a while ago on Professor Paddle about how he nearly didn’t make it out of a hole on the Middle Middle run on the Snoqualmie – a mostly Class III run with a pretty easy IV section that most of us Seattle area paddlers are used to bombing after work without too much thought beforehand.

It’s really worth reading the thread – linked to here – not only because he shares a story that is not the easiest to share, but also because of the responses and advice that follows from other paddlers.  Here are some take-homes that I got from it:

Staying and Getting Out of Holes:

Based on this and some other stories I’ve heard, some of the closest calls you might run into could be on “easy”, Class III type water, and/or on a run that you’re really familiar with.  So don’t let your guard down.

If you’re stuck in a hole, balling up and letting yourself go deep instead of fighting the water should help you flush out.

From Scott’s post and one of the responses, it appears that if things go badly enough that you go limp you also have a better chance of flushing out.  (Let’s not kid ourselves, this option really sucks.)

Kyle Kovalik posted something that I’ve heard is also helpful:  “If you can get flat… swim accross the eddy line into the downstream current, rolling your body as you do (from a breast stroke to a back stroke or vice versa). This works best in flattish pourover style holes.”

Practicing swimming in whitewater is a great idea.  Not fun (I personally suck at it and tend to swim 5 times farther than anyone else, not on purpose) but definitely useful.

This isn’t meant to be an exhaustive explanation of how to get out of holes, but I’ve also heard (and kind of experienced when my sprayskirt blew on Lunch Hole on the Sky a couple days ago) that if you’re still in your boat, pulling your skirt and letting your boat fill with water is another way to possibly get out of a hydraulic.

Getting Back in the Game

Anyway, the main thing I got out of Scott’s post and the ensuing thread was not so much how to get out of holes (although that is useful), but more about the mentality of how to approach kayaking in general.  It’s such an intense sport, and when we’re into it we tend to fall in love with it and go full bore.  But, it’s also dangerous enough that we need to always be aware of the risks in order to last in it long term.  The flip side is, if we focus on those too much we’d seriously just stay home – it’s kind of like reading statistics about every innocent soul who pulled out of their driveway and got T-boned by some dummy going 110 miles per hour on a residential street, and then deciding to never drive again.

The reality is there – yes, it could happen (and getting caught in a vicious hole or pinned on some rock is probably way more likely than becoming a cautionary tale in suburbia) – but if you’re going to boat you kind of have to just take that as part of the deal.

Reading the Professor Paddle thread and from conversations with other boaters, it seems that nearly everyone has had a close call at some point and either had to deal with what is pretty much post traumatic fear, or even take some time off of boating to get their head back in the game.  Some of it is pure psychological conditioning (abject terror = very bad, do not repeat), so I thought the advice that John (doggievacation on PP) gave was good even though I overlooked it the first time I read it.  He said:

“… boat when you feel ready and stick to nice, familiar runs.  Make sure you have fun EVERY TIME you boat and steer clear of any drop that makes you feel panicky.  If you can do that, I think you’ll find the worm will fade on its own, but go with your gut and take your time.”

It usually takes time to get over traumatic experiences, and just like acquiring muscle memory for the roll, part of that psychological conditioning involves pure repetition – in this case, of something good.

Anyway, it’s really helpful to be reminded of how easy it is for any of us to become complacent on a run, or accustomed to getting out of hairy situations without too much carnage.  The fact is, the wrong hole at the wrong level, at the exact wrong angle that puts us in the wrong spot could happen to anyone, at any time, so I really appreciate Scott sharing his story.  It applies to all kayakers at any level, and it’s especially helpful coming from the viewpoint of someone who has had a lot of experience on whitewater.

That being said, paddling scared isn’t exactly a huge help either and there’s no way we can foresee everything on the river, so the best attitude is probably a good blend of realistic caution and a healthy dose of  “Oh, what the heck.”  (I know I tend to focus on the latter because it requires less technical skill.)  Speaking of which, I’ve started dropping into Lunch Hole, a la Dave Moroles and Rob McKibbin.  If these blog posts end unexplainedly, that might be why. ;)

Here’s one of Blair’s videos that shows what a workout a big hydraulic like Lunch Hole can provide, about two thirds of the way through it – it is a super sticky hole in the mid-3,000 cfs range.

I so hoped I wouldn’t have to read a post like this on your blog :)
After watching a couple of those “kayaker stuck in a hole” videos, the fear just overwhelms you ( especially if you are new to ww kayaking like me). I am honestly thinking about switching to one of those inflatable kayaks/packrafts or may be even a riverboard this summer.

Hi Paul, thanks for your comment, have you been out on the river and had a bad experience? I was talking with a very experienced whitewater kayaker who is also an instructor yesterday about this exact kind of thing, and it does seem that when people end up on water that is too advanced for them too early it’s easy to get to the point where the fear factor outweighs the fun. This happens a lot with new boaters whose Class IV and V friends teach them how to boat, especially guys (they can be merciless to other guys. :))

Two things that are extremely important in order to avoid building up that cycle of fear are nailing down a roll – I can’t overemphasize the importance of pool practice, because really, flipping isn’t scary, it’s swimming in moving water that’s scary (and being kept in a hole as a swimmer is actually pretty rare), and then also taking the time to learn river features and basic paddle skills – I see guys taking their girlfriends out on Class III whitewater when they have no idea how water moves in an eddy – I myself paddled for months before I ever figured out what a hole was, and it was months after that before I could actually pick one out from upstream.

So I highly recommend that newer boaters join up with a group like the Washington Kayak Club, http://www.washingtonkayakclub.org, they have a ton of Class II and III trips scheduled all the time with trip leaders who are ready to fish you out of water that’s not terrifying to swim in – it’s perfectly set up for people who really need some river time to get comfortable with basic skills. That’s how I got from II to III, and from then on it’s easy to get into IVs with less organized groups.

Just so you know, pretty much everyone deals with that fear versus fun factor at some point, and honestly I still do as well. Even kayaking superstar Ken Whiting writes about having a near drowning experience when he and his friends were jumping into whirlpools, and how it set him back for a while. So I’d say use your best judgment, the whole point is to have fun out there, whether you’re on a kayak or a riverboard. I’d love to hear what you end up doing and any comments you have.