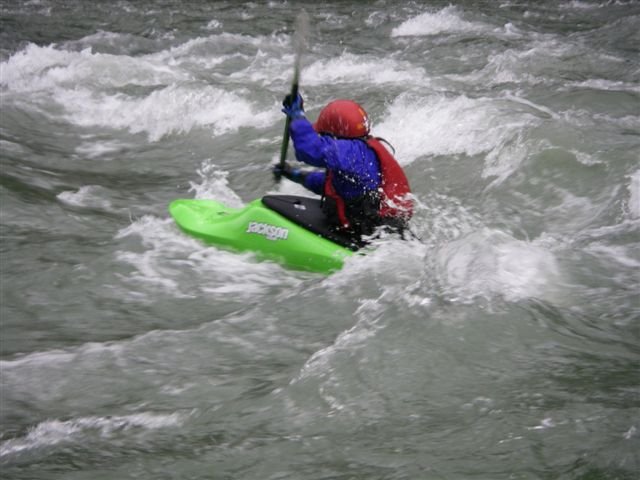 Wondering how to get started whitewater kayaking around the Seattle area? Here’s a rundown of some 2018 classes.

I took their Whitewater Fever Class and I think it’s a great way to start. It’s 5 sessions that take place on evenings and weekends so a person with regular working hours can do it, and it includes two pool sessions, which I think is a big deal because in my opinion NWOC is really good at teaching the Eskimo roll and that’s where they do it.  In 2018 they’ve got two Whitewater Fever classes, one starting June 4 and the other on July 9.

If you can’t make the 5-day class, consider their Eskimo Roll class for $75 which takes place the evening of May 18.  You can figure a lot of stuff out about whitewater kayaking on your own watching training videos, but having a good solid roll on which to base your forward progression is crucial, in my opinion. These guys are not afraid to teach the extended paddle grip roll when people are starting out (See Myth 5 on this other post), which from my own experience when used correctly (not as a crutch, but as a training tool that allows people to develop perfect technique) often shortens the learning curve and allows people to more easily fine tune and troubleshoot their own roll when practicing later on, especially if they’re practicing alone.

Kayak Academy offers a two-day River Kayaking 101 (RK 101) class that basically gets you ready for Class II river running, covering the basics of getting a kayak where you want to go on flat water on Day 1 and after that involving more current and easy eddies, etc.  Cost is $223, with free drysuit rental and all the rest of the gear (kayak, helmet, paddle, PFD, etc.) available to rent for $40 per day.  Right now they have classes in March through June 2018, and also in the fall.

There’s some rolling/wet exiting refresher practice in RK 101, but they say that it’s not really a “learn to roll” class.  Rolling is covered specifically in their RK 103 Beginning Rolling class. It’s a one-time class for $120, with a $25 boat rental fee if necessary. Right now there are none scheduled but you can call them at 206-527-1825 to find out when they may have one.

Their 2018 Beginner Whitewater Kayaking class already filled up (early!) but there’s a waiting list you can get on – click here for the class info and standby list.  This is an 8-session class, pool and river course for $300, with rental packages for the gear running around $250 (or less, depending on what you already have).  I’ve helped out a little bit with this class last year, it’s a really good group and taking a course like this kind of sets you up to have a crew of people who are going to be trying to get out on the rivers after the class, which is always good.

WKC also does a “7 River Challenge” on Class II to III+ rivers which really helps people keep the groove going after the class. (You don’t have to have taken the class, you just need to be a member and obviously have skills appropriate to the rivers you’re going on.)

A Few Thoughts, In No Particular Order

I’m in a hurry so will just jot these down as they come up, otherwise they will stay in my head forever awaiting some more eloquent delivery format. ;)

– This really helped me when I took my roll class at NWOC, and not all instructors do the same stuff so this is what I’d keep an eye out for:

Also, when it comes time for your first combat roll (which you will probably not be expecting, seeing as it’s a combat roll :) – here in Washington this will take place in snow melt, so just anticipate that your first reaction when plunked upside down in ice-cold river water and possibly bouncing your helmet off a rock or two might be to FREAK OUT!!! a la Jerry Maguire. This is totally understandable, but if you’re already anticipating that reaction it’s easier to prepare yourself mentally to instead think “Hang on a second”,  collect your thoughts and remind yourself that you’re just going to do a roll like you’ve done plenty of times in the pool, and then set up for your roll.

Learn how to paddle forward really, really well! This is the most overlooked and in my opinion the most important aspect of whitewater kayaking. I see beginners (and even Class III and IV paddlers) regularly who have a weak forward stroke and/or are doing all arm-paddling instead of using their torso, core and legs. Imagine trying to carve turns on downhill skis on a hill with a 5 degree gradient! Being able to generate speed and momentum is crucial to everything else – carving in and out of eddies, getting to your intended destination in any kind of water, and eventually boofing – it all begins with the forward stroke. So this is not frou-frou stuff, it’s something all the really excellent paddlers have mastered.

A great way to develop a good forward stroke is a) to watch this Michele Ramazza video, which is brilliant, and then b) to practice not just on flat water but practicing attainments (paddling upstream), which forces you to not paddle weakly. But getting the right technique via this video first will set you on the right path – here’s the post:

Well apparently I’m incapable of writing a short blog post. If you have any specific questions about gear or other stuff you’re welcome to send them my way via the Contact page on this blog and if I can help I’m happy to.  See You On The River!