River Reading, and Why We Wear Helmets (Yes, Those Are Related!) 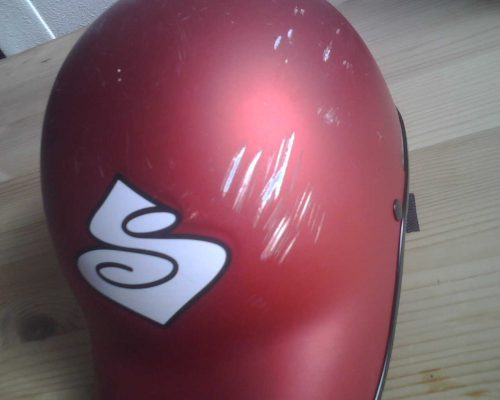 Last weekend I took one of the most fun kayaking trips ever, on the Wenatchee River by Leavenworth.  It was running around 4900 cfs, so not enormous, but the waves are definitely a lot bigger than what I’ve seen on Class IIIs on this side.

Anyway, something happened on the one rapid, Snowblind, that was a) funny, b) a really good lesson – and OK, let’s not forget c) something we’ll probably be able to hold over Jeromy Adams’s head for a long time. :)

I’m terrible at remembering rapids, so as we approached Snowblind I asked Jeromy what the line was.  He had originally said something about a big hole on the left and on the right, but at this point he simply said (with an air of complete certainty) “Just follow my line.”

So it was Jeromy, then me, then Greg Nicoll.  Greg (who may be turning out to be the brains of the bunch) immediately realized something was up when he watched Jeromy go over a drop, then saw the front end of his kayak flip up and his paddle start flailing around.

I, on the other hand, had put my brain on standby when I decided to follow someone else’s line (key concept here) so I just followed him like a big, disaster-attracting sheep.  As I flipped over and got sucked into this big whooshing hole I remember thinking “This isn’t going to be good”, then my helmet got whacked several times so hard on the way in I couldn’t believe it.

The good news is I stayed in my boat, got spat out of the hole and made my roll afterwards.  And it was worth it just to hear Greg’s first words as he bobbed out of the rapid – “Nice LINE, (insert expletive here).”  (Greg and Jeromy are always two of the funniest people on the river.)

In hindsight, though, I actually learned a couple of really good lessons, one being:

Yes it’s great to have people help you through rapids, but anyone can make a mistake, and ultimately we’re all responsible for using our own brains.

And speaking of brains, wow!  Those are actual gashes in my helmet, and the scrapes start on the edge of the front brim.  If my head had been tilted just a bit farther back things might have been a lot different, so the other big reminder to me is:

Tuck as quickly as possible when setting up for a roll!

Not that I hang out down there, but being reminded that big massive rocks are waiting to smash your teeth in sure provides an incentive for speed.

Anyway, it was an awesome day, made even more awesome by my Sweet Protection helmet.

Love your blog Irene. Tx for teaching me that there are actually rocks on the Wenatchee. Too funny.

Thanks Becky! Awesome blog you have too, love the video of the Frog on the Thomson – I got nervous just watching it. :)